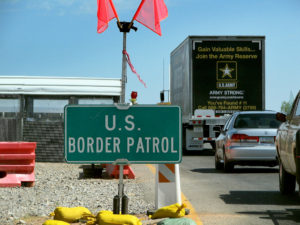 I am on the verge — or perhaps I’ve already taken the step — of declaring rhetorical “war” on those who insist that that those who oppose The Trump Wall are in favor of “open borders,” or are soft on crime, or who don’t want to protect the nation.

I am one of those who opposes the barrier that Donald Trump keeps insisting we build along our southern border.

Do I favor open borders? No. Am I soft on crime? No. Do I want to protect the nation against those who would do us harm? Yes.

Why is this so troublesome? It bothers me in the extreme to hear otherwise normally reasonable people say the things they do out loud, in public, about those of us who believe the president is wrong to declare a national emergency just to build The Trump Wall.

The president promised to make Mexico pay for its construction. It didn’t happen; it won’t happen. Now he is trying to foist The Wall on taxpayers. Congressional Democrats are digging in against that idea, too. So, to circumvent Congress, the president has declared a national emergency where none exists. Democrats are fighting back and, lo and behold, they’re getting some Republican support against the emergency declaration idea.

The day after making the declaration, he flew to Florida to play a few rounds of golf. National emergency? Hmm?

Trump has led the demagogic drumbeat against those who oppose The Wall. He yaps and yammers about open borders, national security and contends that his foes favor the former and oppose the latter.

I simply cannot take any more of that blind demagoguery coming from the president and his political base of supporters.

No one will get hurt in this “war” I intend to declare. Unless, of course, I inflict damage on some feelings along the way.