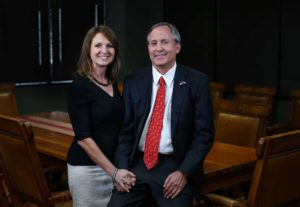 Texas state Sen. Angela Paxton — who was just elected in 2018 — is new in her job as a legislator. The McKinney Republican, though, should have thought better than to propose a bill for consideration that involves her husband, the state attorney general.

Why is that? Attorney General Ken Paxton is awaiting trial on a securities fraud allegation. Sen. Paxton, though, has proposed Senate Bill 860, which broadens the AG’s regulatory power over those who market financial services. You see, AG Paxton is accused of failing to report his own involvement as a securities adviser to potential clients.

Therefore, I intend to accuse Sen. Paxton of being tone deaf.

She is one of 19 Republicans serving in the Texas Senate. I would doubt seriously any of the dozen Democrats who serve with her would buy into what she wants to do, so we’ll look briefly at her GOP colleagues.

It seems odd that the spouse of a statewide elected official who is set to stand trial for securities fraud would propose legislation that affects the official who’s about to become a defendant in a court trial.

They talk about whether legislation passes the “smell test.” This one doesn’t, at least not my olfactory glands.

Couldn’t the rookie Texas senator find a GOP colleague among the 18 of them who serve with her to carry this legislation forward?

Don’t misunderstand me. I don’t necessarily endorse SB 860. It expands the power of the attorney general and seems to remove a level of transparency that should be required when it involves securities and financial regulation.

It’s just that Sen. Paxton carrying a bill that has a direct impact her husband, who’s facing potential prison time if he’s convicted of securities fraud, is a stinker.

Ethics watchdogs seem to believe it stinks, too. I’m on their side.