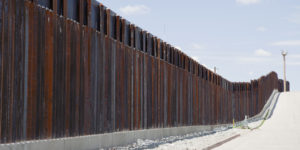 If the speculation that Donald Trump will sign the border security deal hammered out by Congress is true, then I want to offer a preemptive word of praise to the president.

He deserves a good word for resisting the yapping and yammering from the far right wing of his Republican Party who contend that the bipartisan deal is a loser.

I have yapped at Trump quite often about his adherence to the likes of Ann Coulter, Rush Limbaugh, Mark Levin, Sean Hannity, Mark Levin, Tucker Carlson — blah, blah, blah — over their efforts to dictate his legislative agenda.

He listened to ’em once on this border security matter and as a result, we endured a partial government shutdown that stained the president badly.

I don’t like all of the deal, either. It’s better than it could have been had congressional Republicans dug in their heels. Instead, they worked out a $1.37 billion appropriation to build 55 miles of “barrier” along the southern border. It’s not what the right-wing gasbags want, but it keeps the government running.

I hope the president heeds the instinct to ignore them, that he signs the deal, and that we can put this idiocy to rest — at least for now.