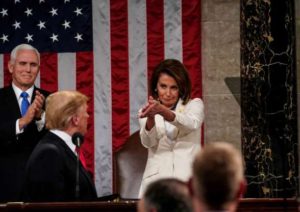 Donald Trump’s second State of the Union speech reportedly went over well with most Americans, who told pollsters overnight they approved of what he had to say.

I was one of those Americans. The pollsters didn’t call me, but I’ll offer this unsolicited view: The president did hit a few good notes and I applaud him for hitting them.

That’s about it in terms of supporting the president’s policies.

Trump called for an end to “partisan investigations.” Well, actually, I don’t consider special counsel Robert Mueller’s search for the truth behind allegations of “collusion” with Russians who attacked our electoral system to be a partisan exercise.

It’s an important one. Yes, the president is right to assert that we need unity at home if we’re going to assume our role as world leader. I’ll just offer this notion: Let the special counsel finish his work, allow him to reveal to the public what he found, let us discuss the findings openly and then we can decide what steps — if any — to take before we move on.

Some takeaways from SOTU speech

I won’t get into the body language chatter that has erupted on social media, such as the strange hand-clap given by Speaker Nancy Pelosi or the sitting on hands by congressional Democrats who now comprise a majority of the House membership.

I simply find the president’s pleas to be utterly lacking in sincerity. He says the right words, but I cannot get past the belief that he doesn’t actually believe what he says. Therefore, how can he expect the rest of us to buy into whatever message he seeks to deliver.

One thought on “There’s still that ‘elephant in the room,’ Mr. President”