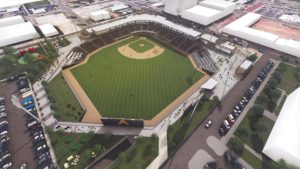 I am beginning to believe I might have set the bar too low in seeking to project the future of downtown Amarillo, Texas and, by extension, the rest of the city.

The picture linked to this blog post is a rendition of what Hodgetown — the name of the new ballpark that is nearing completion — is going to look like. It is going to be the home for the Amarillo Sod Poodles, the AA minor league baseball team that begins its season on April 8 in the new venue.

I don’t get back to Amarillo as often these days. I have driven by Hodgetown and seen it taking shape along Buchanan Street just south of City Hall.

So, what does it mean for the city? It means it will attract crowds of residents from throughout the Texas Panhandle into the downtown district. The crowds will watch the Sod Poodles play some baseball and then perhaps they’ll wander around the city center in search of a meal, or a beverage or some music.

Downtown Amarillo — like downtowns in cities throughout the nation — used to be retail centers. Department stores did business downtown. Residents flocked into downtown Amarillo to shop. Then came the arrival of those once-ubiquitous shopping malls. Westgate Mall opened on the far west side of Amarillo, attracting those department stores away from downtown.

How did that happen? In my view, it occurred when the city began investing public money in its downtown district. Amarillo had an organization called Downtown Amarillo Inc. that did a lot of the grunt work that prepared the city to move forward. DAI eventually dissolved. Center City has stepped up, along with a City Hall reorganization. Amarillo established a tax reinvestment zone that channels property tax appraised value back toward improvements inside that zone.

Downtown has continued to advance.

We have moved away. However, I am continuing to watch the city’s progress toward a future that looks even brighter than I envisioned just two years ago.

It’s a thrilling sight to see. I have said it before, but it bears repeating: Show me a thriving city in America and you’re likely to see a city with a thriving downtown district.