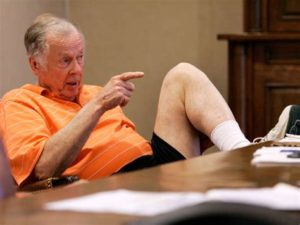 I once had to chase down individuals to interview. There were times I had to work exceptionally hard to persuade someone to talk to me while I worked in daily journalism. I always welcomed the challenge.

T. Boone Pickens — the legendary oil and gas tycoon — presented both sides of that coin. He was the toughest interview to nail down, but then he was what they call in the business a “good get” when he consented finally to talk to me.

A little history is in order.

I worked for the Amarillo Globe-News for nearly 18 years. I arrived in Amarillo after Pickens had departed Amarillo for Dallas. He left the city where he lived and did business in a huff. He was angry and decided to take his business to Big D.

He also was angry with the Globe-News. In the late 1980s, he began a campaign designed to inflict damage on the paper because he didn’t like the way it reported on him and on the community. He formed a group called People Committed for a Better Amarillo Newspaper — or PCBAN. He ran off the publisher of the paper and hung a banner off his Mesa Petroleum building saying “Goodbye Jerry” Huff.

I arrived in January 1995. Pickens was still mad at the paper. Not long after I arrived in Amarillo, Pickens announced an effort to create a wind farm complex. He also wanted to transport Texas Panhandle water to places downstate. I wanted to talk to him about it all. I called his public relations guy.

The PR guy resisted granted me any time with Pickens. I argued, dickered, bargained; I offered to meet Pickens at a diner in Pampa near his ranch and said I would “buy him a burger.” Pickens wouldn’t budge. The PR guy asked me if I was aware of the bad blood between Pickens and the G-N. Of course I knew about it. That was then. Those players all are gone, I told him.

I called him again years later. I asked for an audience with Pickens. Two days later, Pickens agreed to meet with me. Just like that! He would come to the Globe-News. He would talk about anything I wanted to talk about. I thought: What the hell?

I knew about this guy. He was a ferocious competitor; a wildcatter who made a fortune exploring for oil and natural gas; he harbored grudges; he made lots of enemies as well as friends; he was a tough SOB.

I also had heard about his charm, his intelligence and his generosity.

The Boone Pickens who darkened our door at the G-N was what I have called “The Good Boone.” He was charming to the max. He was talkative. He dropped names like crazy: Barack Obama, George W. Bush, the King of Saudi Arabia, this and that potentate.

Pickens told me he read the paper daily. He said he took note of the columns I would write, or the editorials that appeared in the paper. I don’t know if he actually did all that or if he was just offering a form of false flattery.

Whatever it was, we got along well during the two hours we met.

Our paths would cross a couple more times. I saw him a second time while he was in Amarillo attending an oil/natural gas meeting at the Civic Center. Then, while working as a feature writer for KFDA NewsChannel 10, he welcomed a TV reporter, cameraman and me to his magnificent Mesa Vista ranch in rural Roberts County.

I hear that Boone Pickens has been in ill health. He’s in his 90s now and is divesting himself of his myriad and massive business interests.