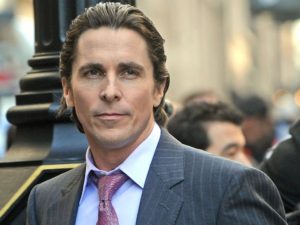 Christian Bale more or less demonstrated the kind of behavior I wish wouldn’t occur at these awards ceremonies.

The actor — who I recognize is a brilliant artist — decided to stick it in the eye of former Vice President Dick Cheney while accepting his Golden Globe award Sunday night for best actor in a dramatic film. Bale portrays Cheney in the film “Vice,” and I must say he turns in a stellar performance.

Bale thanked director Adam McKay for casting him to portray the former VP. But . . . then he described Cheney as “absolutely charisma free and reviled by everybody.” Sigh.

Bale wasn’t finished. He said in the future he would be “cornering the market” on portraying “charisma-free assholes.”

“Thank you to Satan for giving me inspiration,” Bale added.

I have already stated my wish that actors and others in the entertainment industry would refrain from making political statements at these events.

It’s fair to wonder, though, why Bale would decide to launch a gratuitous assault on an individual who — regardless of how you feel about him — is a significant, historic American political figure. Why then? In that moment? In that context?

I just don’t get it.

Oh, one more thing: Christian Bale is a Brit. Meaning that he didn’t have a voice in determining whether Dick Cheney would occupy any of the public offices he held.

One thought on “Bale sticks a former VPOTUS in the eye . . . needlessly”