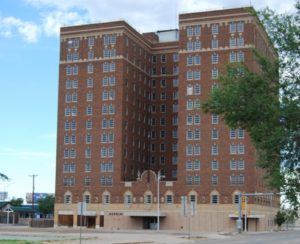 You’ve heard it said, “If they can put a man on the moon, why can’t they, um, make the trains run on time?”

Amarillo, Texas, might have a “put a man on the moon” metaphor of its own. It could go something like this:

“If they can find a way to rehabilitate and reopen the crappy hulk of a structure known as the Barfield Building, why can’t they do the same thing for the Herring Hotel?”

The Barfield Building — which is a rotting 10-story structure at the moment — is going to be repurposed as a Marriott boutique hotel.

Meanwhile, the Herring Hotel, once the city’s go-to place for every social event of consequence, also is rotting. It’s dark. It is foreboding.

A friend of mine, Bob Goodrich, has owned the building since the 1980s. He bought the abandoned structure with the hope of finding someone to invest big-time money to rehabilitate and revive it. He says he has scored some near misses. He’s been disappointed. He pays the taxes annually on it. The building isn’t quite the eyesore that the Barfield has become.

I’ve been through the first two floors in the Herring. Granted, there’s a lot of work that needs to be done. It is in surprisingly decent condition, however.

Some contacts I used to have who were involved in downtown revitalization have told me they foresee a viable future for the Herring. Many of those folks have moved on. I am not familiar with many among the current crop of brainiacs who are talking among themselves about what to do about the Herring.

Nor am I familiar with all that has taken place to date.

I simply am amazed that a hospitality management company has actually taken control of the Barfield and has actually begun work to bring that miserable hulk of a structure back to life.

I consider the Barfield to be among the worst examples of urban rot in downtown Amarillo. If they can find a new purpose for the Barfield, isn’t there a future to be found for the Herring?