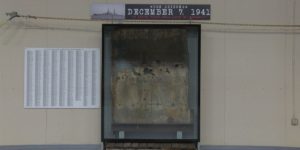 A piece of an iconic historical treasure is now in display at the Texas Panhandle War Memorial. It is a small section of the USS Arizona, the World War I-era battleship that was sunk 77 years ago today at the attack on Pearl Harbor, Hawaii, by Japanese fighter pilots.

The event thrust the United States into World War II.

Houdashell made it his mission to bring a piece of the sunken ship to Amarillo, to display it at the War Memorial, which honors the men from the Texas Panhandle who fell in battle in conflicts dating back to the Spanish-American War.

The judge told KFDA NewsChannel 10: “Pearl Harbor, the Arizona, is a cemetery,” said Judge Houdashell. “There’s hundreds of men still buried on that. We have a piece of a national relic and it’s a sacred relic. Very few people have a piece that big. There’s a little bitty piece at the WWII Museum but we have a huge piece.”

He meant to welcome the display on Pearl Harbor Day, when the nation remembers the event that mobilized the nation into a new era of industrial and military might in the fight to quell the tyrants in Europe and Asia who sought to conquer the world.

I am delighted that Ernie Houdashell accomplished his mission, just as he worked to bring the F-100 Super Sabre jet fighter and the UH-1 Huey helicopter — both Vietnam War relics — to the War Memorial grounds at the site of the former Randall County Courthouse Annex in south Amarillo.

These displays are important to Houdashell, who served two tours in the Vietnam War himself and who wears his love of country on his sleeve. Indeed, they are important to all Americans, all of us who understand the sacrifice made by those who fell in battle. The names of the Panhandle sons who fell are inscribed on the stone tablets that stand on the memorial grounds.

They now are accompanied by yet another historical artifact, a reminder of the horror of the bloodiest war the world has ever seen. May it stand as the worst the world will ever see.