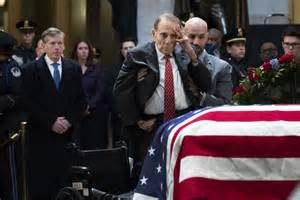 The scene was almost too much to bear.

Dole is a very old man now. His body is betraying him. He was pushed in a wheelchair toward the 41st president’s casket. To watch this great man struggle to stand — at attention! — while he paid tribute to the president tore hard at my heart.

Oh, I remember the day when Sen. Dole was known as a political pit bull. He ran as vice presidential running mate to President Ford on the 1976 Republican ticket. Do you remember when he referred –during a vice-presidential debate with Sen. Walter Mondale — to World War II, Korea and Vietnam as “Democrat wars”?

Then in 1988, he competed for the GOP presidential nomination against Vice President Bush, the same man he saluted today under the Capitol Dome. On a split TV screen, he said through a scowl that the VP should “stop lying about my record.”

In 1996, Dole became the Republican presidential nominee but lost in a landslide to President Clinton, who won re-election that year.

But before all that, Sen. Dole was a young soldier fighting for his country against the Nazis. In 1945, near the end of World War II, the young soldier was wounded grievously while trying to rescue another Army infantryman. He would lose the use of his right arm as a result of his wound. It didn’t stop him from pursuing a long and distinguished career in politics.

To watch him, then, struggle today and then lift his left hand to salute his former rival, well . . . it broke my heart.

Sen. Dole, too, is part of the Greatest Generation. He is a man to whom we all owe a debt of eternal gratitude for helping turn back the tyrants and for his decades of continued public service for the nation he cherishes.