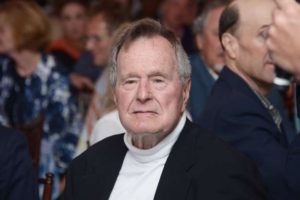 The tributes are pouring in from around the world over the news our nation received Friday night, that our 41st president, George H.W. Bush has died at the age of 94.

We knew it would come sooner rather than later, quite obviously. President Bush led the fullest of lives. He now joins the love of his life, Barbara, in eternal peace.

Of all the ways to honor this great man, I want to look briefly at two related episodes of his four-year presidency. They speak to this man’s humility and his grace. Yes, he was the most qualified man ever to serve as president: combat Navy aviator during World War II, successful West Texas  businessman, member of Congress, special envoy to China, ambassador to the United Nations, director of the CIA, Republican Party chairman, vice president of the United States.

I’ll leave it to others to comment on those accomplishments, singularly and collectively.

Two events occurred on his presidential watch that speak to this man’s astonishing grace: the Berlin Wall tumbled down in 1989 and the Soviet Union collapsed in 1991.

The collapse of the wall was a singular event that heralded what we all knew was going to happen, that communism in Europe was done for. Did President Bush high-five everyone he could find to celebrate the event? No. He stood by stoically while the world witnessed with its own eyes the unification of a great European nation and the first visible sign that the end of the Cold War was at hand.

Then came the dissolution of the Soviet Union two years later. Soviet chairman Mikhail Gorbachev resigned. The communist government collapsed under its own weight of corruption ideological bankruptcy. It was replaced by the Russian Federation. It began a new era we all hoped would signal the creation of a democratic state in the former USSR. Sadly, it hasn’t worked out the way we hoped it would.

Again, the president didn’t run a victory lap. He didn’t proclaim that the Good Guys had defeated the Bad Guys. He didn’t gloat, prance and preen. He acted with nobility and calm. The world did not need to hear the president of the United States explain what it was witnessing in real time.

Those, I submit, are the hallmarks of a man who knew his place and knew in his huge heart how to behave while the world was changing before our eyes.

We are saddened today to learn of the passing of this great man. We are grateful, though, for his lifetime of service to his beloved nation.