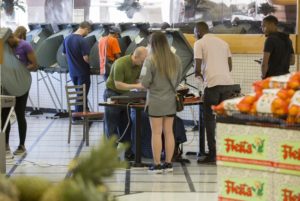 My hatred of straight-ticket voting has been chronicled numerous times on this blog and even during the time I worked for a living.

It is one of the curses that have infected Texas government. It’ll be gone before the 2020 presidential election, thanks to a repeal enacted by the Texas Legislature.

According to the Texas Tribune, the demise of straight-ticket voting didn’t happen soon enough to save the careers of dedicated public servants.

The Tribune singled out what happened to Harris County Judge Ed Emmitt, whose leadership helped Harris County recover from the ravages of Hurricane Harvey in 2017. Emmitt, a moderate Republican, drew bipartisan praise for his post-Harvey work. He lost re-election this past week, though, to a political novice, 27-year-old Democratic challenger Lina Hidalgo, who the Tribune reports had never attended a Commissioners Court meeting before defeating the incumbent judge.

She benefited from straight-ticket voting, along with other Democrats appearing on down-ballot races in the midterm election.

This is precisely why I detest the practice of allowing voters to punch the straight-party slot on the ballot. Too many politicians who should be elected or re-elected are bounced out simply because of party loyalty.

The major beneficiary of this travesty in Texas in recent years have been GOP politicians, with worthy Democrats falling victim to voters’ polling place laziness.

That’s going to change in 2020. The demise of straight-ticket voting at the very least will force voters to look at each race on the ballot and make their choices individually. My hope, but not necessarily my expectation, would be that voters would consider their choice before making it.

Most states disallow straight-ticket voting. Texas, therefore, is joining a long list of states that have thought better about allowing voters to go just with the party without considering the merits of an individual candidate — whose performance or philosophy might not adhere strictly to a political party’s platform.

The end of straight-ticket voting, in my view, is a win for the cause of good government.