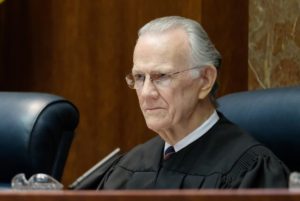 It is with a touch of sadness and a bit of pride as well that I have just learned that a member of the Texas Supreme Court is retiring at the end of the year.

Justice Phil Johnson is calling it a career.

I’ve known Johnson for several years. I worked as editorial page editor of the Amarillo Globe-News and Johnson was chief justice of the 7th Court of Appeals based in Amarillo. Thus, he became a source for me. We developed a nice relationship over the years.

Why the sense of pride?

Well, it goes like this. When the vacancy occurred on the state’s highest civil appeals court 13 years ago, I authored editorials for the newspaper urging Gov. Rick Perry to look past the I-45/I-35 corridor from where all Supreme Court justices hailed. I checked out the histories all the remaining eight justices and learned they all came from communities within that swath that runs through Central Texas.

The newspaper urged Gov. Perry to look westward. Johnson expressed an interest in getting appointed.

To his credit, Perry did appoint Johnson to the court.

Now, I am not going to take credit for the appointment. It’s likely no more than a coincidence. After all, Johnson did have one powerful friend in the Texas Senate, fellow Republican Bob Duncan — a former law partner of Johnson in Lubbock — who very likely made it known to the “right people” that Gov. Perry needed to appoint Johnson to the Supreme Court.

So, I’ll take all the credit I deserve for Justice Johnson’s appointment.

I also want to wish this good man well as he rides off into retirement.