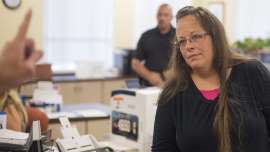 She is a Rowan County (Ky.) clerk who made a spectacle of herself when she declined to sign marriage licenses requested by same-sex couples. That was her reaction to a landmark U.S. Supreme Court ruling in 2015 that made gay marriage legal in all 50 states.

Well, Davis has lost her bid for re-election.

Davis proclaimed that her religious beliefs precluded her from signing marriage license requests for gay couples. She had run initially as a Democrat; she switched parties, becoming a Republican. Her refusal to uphold her oath landed her in jail briefly. She came out and made a big show of it by standing alongside Baptist preacher (and former Arkansas governor) Mike Huckabee.

Here’s the deal, though. Davis’s oath of office demanded that she obey the U.S. Constitution. She declined to remain faithful to her oath. She then let deputy clerks sign those certificates to protect the boss from doing so.

She’ll be out of office by the time January rolls around. That’s fine. Hit the road, Mme. Clerk.