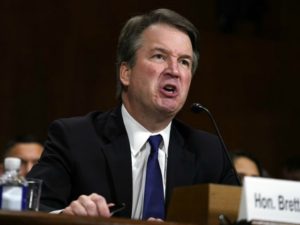 I am going to revisit an issue I once declared was done. I’ll be brief, so bear with me.

Supreme Court Justice Brett Kavanaugh went through a grueling confirmation hearing before the U.S. Senate Judiciary Committee because of an accusation leveled against him by Christine Blasey Ford, who said when the two of them were teenagers, he sexually assaulted her.

Kavanaugh denied it in the strongest terms possible. Most of the Senate believed him, despite Ford’s compelling testimony that it happened.

Was the justice applying for a lifetime job on the highest court in the land or was he being grilled in a criminal investigation,  you know, by prosecutors and cops. Well, it was the former. He was seeking to be confirmed after Donald J. Trump nominated him.

I, too, have been able to interview applicants for jobs. I was able to hire individuals who worked under my supervision. I have had to let a couple of them go over time. It’s not fun.

Here’s the question of the day: Were I to hear of an allegation of a sex crime leveled against someone who wanted to work for me, would I presume them to be innocent until they are proven guilty? No. I would consider that a disqualifier. I would be under no obligation to presume anyone’s innocence if I perceived the allegation to have a lick of credibility.

That appeared to be the issue facing Judiciary Committee members and then the full Senate when they pondered Kavanaugh’s fitness for the job he was seeking.

I want to circle back to a point I made in an earlier blog post. Justice Kavanaugh’s position as a “job applicant” did not rise to the level of criminal defendant. He wasn’t answering questions in a courtroom. He wasn’t being grilled by cops. He was being questioned by politicians who were considering whether to hire him for a lifetime job on the nation’s highest court.

Well, it all went for naught. Kavanaugh was confirmed. He’s now on the court. He’ll be there for the next umpteen years, making decisions on the constitutionality of some of the most controversial issues of our time.

Did he do the terrible things his accuser said he did? We’ll never know … will we. As a former employer, I would not want to live with such uncertainty hanging over someone who works for me.