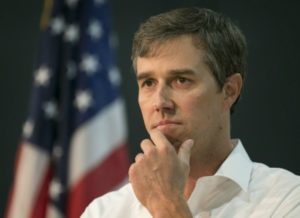 I’ll admit to some alarm when I heard a campaign ad from Ted Cruz that asserted that his opponent, Beto O’Rourke, had pitched a notion to legalize all narcotics, including heroin.

I discovered this item on Politifact, which declares Cruz’s statement to be “False.”

Politifact discerned that while he served on the El Paso City Council, O’Rourke called for a wide-ranging debate on the “war on drugs,” which he has declared to be an “abject failure.” He has called for the decriminalization of marijuana use. But legalizing heroin? Or other hard drugs? Not even close.

The success of the nation’s drug war certainly is a debatable point. I tend to agree with those who contend that we cannot declare victory in this war against drugs. It’s never-ending. The cops pull a lot of vehicles over on the highway ostensibly for “traffic violations,” only to find loads of drugs and cash on board. They confiscate the dope, arrest the drivers, try the accused, convict them, send them to prison. Does that stop the drug flow? No. It doesn’t.

Do I want heroin legalized? Of course not! Based on what I’ve been able to discern, neither does Beto O’Rourke. The half-baked assertions from his political foe tell me that Cruz — who was supposed to win re-election in a stroll — is in the fight of his life.

Ted Cruz shouldn’t be allowed to lie his way back to office.