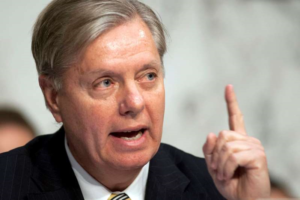 U.S. Sen. Lindsey Graham is trying to cover Donald Trump’s backside with a plan to introduce legislation in the Senate to reverse a constitutional amendment that provides U.S. citizenship to anyone born inside the United States of America.

Trump declared his desire to issue an executive order that would end the right of instant citizenship to anyone born here. The big problem facing the nutty idea is that the rule comes to us in the form of the 14th Amendment to the U.S. Constitution, which was proposed in 1866 and ratified in 1868.

In order to amend the Constitution, this legislation needs a two-thirds vote in both chambers of Congress and must be ratified by three-quarters of the 50 states. It is a steep hill to be sure.

It’s also a ridiculous and gratuitous attack on a U.S. tradition that has been part of the law of the land for 150 years.

Good grief, if we’re going to get tougher on illegal immigration, then let’s use existing laws and modernize security policies. We don’t need to build a wall along our southern border.

Nor do we need to repeal the clause contained in an existing amendment to the U.S. Constitution.