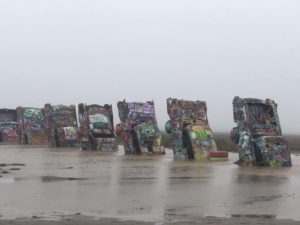 Amarillo and Texas Panhandle residents — and millions of visitors to the region — know what this picture depicts.

Cadillac Ranch was under water earlier this month. The picture, snapped by KFDA NewsChannel 10 reporter Jami Seymore, illustrates the good news/bad news situation that is occurring throughout Texas.

I live in the Dallas/Fort Worth Metroplex these days. I spent 23 years in Amarillo, visiting Cadillac Ranch many times.  I don’t recall ever seeing the Caddies under water in this fashion. Wherever he is, the late Cadillac Ranch founder Stanley Marsh 3 is smiling.

The region has been punished by drought since the beginning of time. It also has been restored by heavy rain over that same span of time. The Panhandle and much of the rest of the state well could be undergoing a restoration at this moment.

We’ve been wet in Collin County of late. I have bemoaned the rain at one level, in that it makes running errands a bit problematic on occasion. I’ll suck it up and endure right along with the rest of my fellow travelers.

As for the Panhandle, the good news quite naturally is that the moisture replenishes farm and ranch land. The dryland farmers who don’t irrigate their crops, relying exclusively on rainfall to do that for them, are ecstatic. So are the ranchers whose livestock depend on rainfall provide them feed to fatten them up for market.

Lake Meredith, the huge reservoir in Hutchinson County that provides potable water for communities throughout West Texas, also is seeing a resurgence. Remember when it sank to a depth of 26 feet about five years ago? It’s at more than 75 feet today — and it’s getting even deeper!

Is the drought over? I don’t think we should act as though it is. The Panhandle is wetter than it’s been for some time. So is the Metroplex, where communities as recently as two years ago were enacting water-use restrictions on residents. Water remains a finite resource and it’s more vital than any of the oil and natural gas we’ve been pumping out of the ground since the early 20th century.

We gripe about all the “bad news” we hear and read. I want to share this post — and the picture — to cheer you up. Are you cheerful now?

Good! Have a great day.

Water getting harder to reach

One thought on “Has the latest drought ended — for real?”