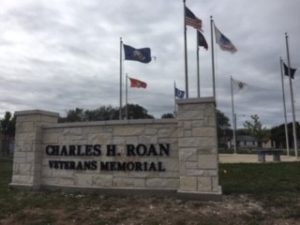 CLAUDE, Texas — A little more than 74 years ago, a 21-year-old U.S. Marine was engaged in a ferocious firefight on a Pacific Island. Enemy troops lobbed a grenade at his position.

The Marine threw himself onto the grenade. It exploded, killing him. The Marine’s bravery and valor, though, saved the lives of four comrades and for that single heroic act, he was awarded the Medal of Honor.

Charles H. Roan is a hero forever. His hometown of Claude not many years ago erected a memorial in PFC Roan’s honor. It was damaged by someone, either accidentally or on purpose. I wrote about that memorial in an earlier blog post.

I want to share this brief item, along with the accompanying picture, to show you how the community has erected what I consider to be a more fitting and lasting memorial to its son, the Marine, the hero who gave his full measure of devotion during World War II.

The Charles B. Roan Veterans Memorial sits on the south side of U.S. Highway 287 as you enter Claude from the west. It contains memorial bricks that comprise a walkway into the memorial; the bricks are engraved with the names of other veterans.

Roan, though, earned this tribute through what the Medal of Honor citation calls his “intrepidity.”

I am glad the community responded in this fashion, by honoring Charles Roan — and all veterans — in the first place and by erecting a strong and stable memorial that will honor this young man’s heroism … I hope forever and ever.

Once again, here is the text of the citation awarded to PFC Roan’s family by President Truman.

For conspicuous gallantry and intrepidity at the risk of his life above and beyond the call of duty while serving with the Second Battalion, Seventh Marines, First Marine Division, in action against enemy Japanese Forces on Peleliu, Palau Islands, 18 September 1944. Shortly after his leader ordered a withdrawal upon discovering that the squad was partly cut off from their company as a result of their rapid advance along an exposed ridge during an aggressive attack on the strongly entrenched enemy, Private First Class Roan and his companions were suddenly engaged in a furious exchange of hand grenades with Japanese forces emplaced in a cave on higher ground and the rear of the squad. Seeking protection with four other Marines in a depression the rocky, broken terrain, Private First Class Roan was wounded by an enemy grenade which fell close to their position and, immediately realizing the imminent peril to his comrades when another grenade landed in the midst of the group, unhesitatingly flung himself upon it, covering it with his body and absorbing the full impact of the explosion. By his prompt action and selfless conduct in the face of almost certain death, he saved the lives of four men. His great personal valor reflects the highest credit upon himself and the United States Naval Service. He gallantly gave his life for his comrades.