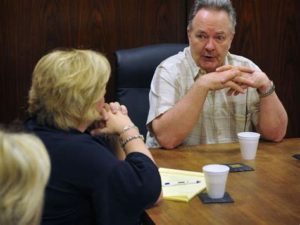 Sagan has gotten some help from a most unlikely source. The question now though is this: What good will it do? I have an answer: Hardly none.

Still, the Houston Chronicle, which sits way down yonder on the Texas Gulf Coast, has urged readers of the paper to vote against Thornberry, who’s running for re-election in the 13th Congressional District, stretching from the Texas Panhandle to the Dallas/Fort Worth Metroplex.

The Chronicle said “voters from Amarillo to Wichita Falls” should endorse the Democrat Sagan or the Libertarian Calvin DeWeese. The paper referred to the challengers as “two politicians who didn’t kick us while we were under 50-plus inches of floodwater.”

The Chron is angry that Thornberry was one of four Texas Republican congressmen to oppose aid to the Houston area in the wake of Hurricane Harvey. You remember Hurricane Harvey, yes? It dumped all that rain a year ago along the Gulf Coast from Houston to the Golden Triangle.

Three of the four naysayers aren’t seeking re-election. Thornberry is the last man standing. He has drawn the ire of the Houston Chronicle. One of the GOP lawmakers who said “no” to Harvey funds is Sam Johnson of Plano, who happens to be my congressman now that my wife and I have moved to the Metroplex.

The task for Sagan now is spreading the word among Texas Panhandle voters about the seeming heartlessness of a native Texan who just couldn’t support legislation aimed at helping fellow Texans in maximum distress.

I am pulling for my pal, Greg Sagan.