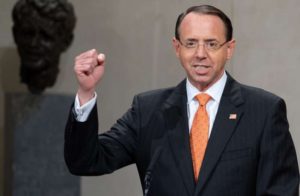 Hang on just a doggone minute … or two!

Donald Trump flew on Air Force One this week with Deputy U.S. Attorney General Rod Rosenstein. They talked at length, reportedly, about this and/or that. Rosenstein at this moment is up to his eyeballs in an investigation involving the president’s 2016 campaign and whether it “colluded” with Russians who attacked our electoral system.

I’ll now flash back to that election year. Former President Bill Clinton met on an airplane with then-AG Loretta Lynch. They reportedly talked about grandkids and other personal matters. The Justice Department was investigating that e-mail matter involving the ex-president’s wife, Hillary Clinton, who was running for president herself.

Republicans went ballistic. They became apoplectic, accusing the former president of trying to influence the AG. Indeed, the ex-president had no direct say in anything involving the DOJ.

GOP pols didn’t believe him and Loretta Lynch when they said they didn’t discuss anything about the e-mail matter.