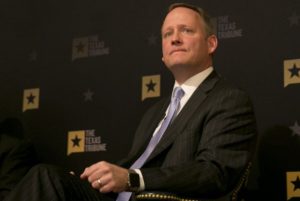 It would be presumptuous of me in the extreme to assume that state Rep. Four Price of Amarillo read a recent blog post of mine and then decided to run for speaker of the Texas House of Representatives.

Whatever, my friend has joined a growing gaggle of politicians seeking to succeed Speaker Joe Straus as the Man of the House.

I applaud him for taking the plunge.

Price joins four fellow Republicans and a Democrat in the speaker’s race.

I’ve already stated my bias. Price is my friend and, thus, my admiration for his legislative skill is tainted somewhat by my personal affection for him. Still, the young man has cast a large shadow over the 150-member Texas House since he joined that body in 2011.

“Having successfully worked for the last four sessions with my colleagues from across our state to pass major legislation and focus on issues of importance to all Texans, I am eager to seek this leadership position in the Texas House of Representatives,” he said in a statement. “Looking towards the future, I truly believe the Texas House will play a leading role in making the decisions that keep Texas on the path to prosperity.”

I am quite certain Price knows what becoming speaker would mean to his role as a “part-time citizen legislator.” It means he would become nothing of the sort. House speakers essentially become full-timers, on call 24/7 to the media, to fellow pols, to constituents who live far beyond their legislative districts.

I find it impossible to believe that Price has failed to build sufficient political alliances within the House to make a serious run for the speakership.

With all the talk we keep hearing about the shifting power balance in Texas, as rural districts such as the one Price represents in the Texas Panhandle lose their clout, a Four Price speakership could produce a boon to the often-overlooked region way up yonder at the top of Texas.

So, good hunting, Rep. Price as you scour your colleagues for the support you’ll need as you seek to run the show in the Texas House.