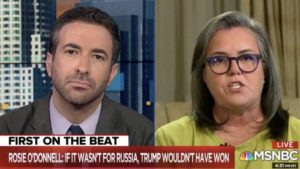 The so-called “mainstream media” can’t get a break.

They’ve long been the punching bag for conservative media and fellow right-wing adherents, suggesting that the mainstream media were tools of the liberal/progressive left.

But, hey, get a load of this: Now the mainstream media are under attack from a noted liberal/progressive activist who blames the MSM for allowing Donald J. Trump to be elected president of the United States in 2016.

Welcome back to the fray, actor/comedian Rosie O’Donnell, an occasional target of Trump’s insults and barbs.

According to The Hollywood Reporter: Though speaking to MSNBC, the comedian did not shy away from critiquing the network for being one of the outlets that refused to be sufficiently critical of Trump. “It took you guys a long time to call him a liar, and the man’s been lying every single day since he’s been in office,” she argued.

Though the president and O’Donnell have notoriously feuded in the past, with Trump once referring to her as a “fat pig,” the comedian says she’s actually “never spoken” to Trump. “He was on my show once. …. But I never spoke to him in my life.”

So, there you have it. The mainstream media have been targeted from those on both ends of the political spectrum.

If I were still working for an MSM outlet, I would consider it a compliment.