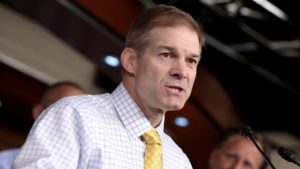 This cannot possibly be happening. But it is.

U.S. Rep. Jim Jordan wants to become the next speaker of the House of Representatives. The current speaker, Paul Ryan, isn’t running for re-election. Ryan has endorsed House Majority Leader Kevin McCarthy as his successor, according to The Hill.

That hasn’t dissuaded the young Freedom Caucus co-founder, Jordan, from joining the speaker fray in the fight to become the person who is second in line to presidential succession.

Jordan has been accused by several former Ohio State University wrestlers of looking the other way while these athletes were being sexually abused by a team doctor. Jordan denies the accusations categorically. Still, they are mounting up, much like the women who accused a former Alabama Supreme Court chief justice of abusing them when they were much younger.

The irony? It goes like this: A former U.S. House speaker, Dennis Hastert, pleaded guilty to a felony charge related to the abuse of young boys he coached many years ago in an Illinois high school. Hastert wasn’t charged specifically with sexual abuse, as the statute of limitations had expired. He did admit to doing so, however, during his sentencing.

I just find it strange, weird and oh, so ironic that Jordan would seek the same office once held by someone who also got himself into deep doo-doo over a sexual abuse matter.

You also can bet the farm that Democrats are going to use Rep. Jordan’s own set of (alleged) troubles against him as they seek to re-capture control of the House of Representatives in this fall’s midterm election.