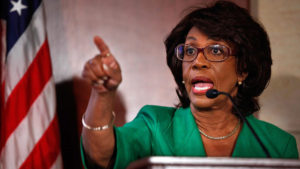 How would she react if someone were to approach her in a public place and began berating her over some statement she made? She wouldn’t like it one damn bit.

Thus, why in the world does the California Democrat believe it’s all right for anyone associated with the Trump administration to except — and possibly accept — similar treatment by Americans who are upset with the president’s policies.

Waters made that ridiculous assertion recently in the wake of White House press secretary Sarah Huckabee Sanders’s experience at a Lexington, Va., eating establishment. The owners of the eatery asked Sanders to leave, expecting that she might be harassed by other patrons. Sanders got up and left the Red Hen restaurant.

The incident has provoked a partisan fight.

In reality, Rep. Waters is flat wrong to suggest that Trump administration senior staffers should have to expect such treatment.

Senate Minority Leader Chuck Schumer has called it correctly. He labeled such a point of view as “un-American.” Again, from The Hill:

“I strongly disagree with those who advocate harassing folks if they don’t agree with you. …No one should call for the harassment of political opponents. That’s not right. That’s not American,” Schumer said from the Senate floor.

Schumer added that he understands the “frustrations” some members of his party feel when Trump “complains about bullying [and] harassment” even though the president uses it “as a regular tool almost every day.”

“But the president’s tactics and behavior should never be emulated. It should be repudiated by organized, well-informed and passionate advocacy. As Michelle Obama, a person who represents the same kind of fineness that we’ve always had in America … said, ‘When they go low, we go high,’” Schumer said.

Think of the Golden Rule, Rep. Waters, and ponder whether you would like to be treated in a way you would treat others.