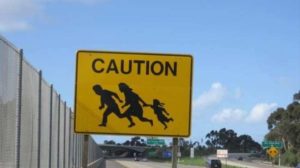 I am slapping myself silly out of frustration, outrage and anger at the president’s utter ignorance.

He fired off this little ditty this morning via Twitter:

We must maintain a Strong Southern Border. We cannot allow our Country to be overrun by illegal immigrants as the Democrats tell their phony stories of sadness and grief, hoping it will help them in the elections. Obama and others had the same pictures, and did nothing about it!

Where do I begin? Or end, for that matter?

No, sir. Nothing “phony” is going on at the nation’s southern border. The children are in distress. So are their parents. Yes, they should enter the United States legally. On that point, I am with the president. However, their reasons for seeking entry are as complex as the problem that has erupted.

Many of them are fleeing brutality, gang violence, poverty. They want a better life for their families. Why is that so difficult for the president to understand? He implies through his tweets and other public statements that every illegal immigrant is “infesting” this country intent on doing something evil. He suggests they are bringing “crime” into the United States.

This is nothing short of a disgraceful display of bald-faced prejudice and bigotry.

Phony stories of sadness? Hardly, Mr. President. These tragedies are real and they need answers — not recrimination.

One thought on “Nothing ‘phony’ about these tales of woe, Mr. POTUS”