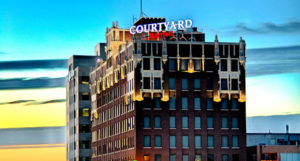 I don’t want to attach some overblown significance to this, but a TV news report I watched last night suggests that downtown Amarillo’s former “main drag” is being reborn into something quite different, and equally cool.

We returned this week to Amarillo for a brief visit before returning to our new home in the Dallas area. I learned about the opening of some new business establishments along Polk Street.

Back in The Day, Polk Street served dual functions for the city’s residents, or so I learned. One was that it was a retail center: lots of shopping galore. Two was that it served as a place for kids to “cruise” at night. You know what I’m talking about: Guys with cool cars would take them along the street and show them off to girls.  Yes? Yes!

The retail went away. The cruising activity has moved to other locations.

What’s happening along Polk these days, though, is a rebirth of places for folks to enjoy a meal, a beverage or two. Restaurants are opening up in new locations. One of them, Crush, is relocating across the street.

Buchanan Street has that fancy hotel across the street from the Civic Center. And, oh yes, the ballpark is under construction across from City Hall.

I won’t equate this rebirth to any sort of religious event, as in being “born again” to the Christian faith. However, I am struck by the astonishing acceleration of progress toward that new life downtown after so many years of stagnation. There were lots of discussion about moving forward. But … nothing happened.

Now, with relative suddenness, that discussion has turned into action. They’re tearing up old storefronts, refitting them into something new. They’re turning historic buildings (such as the Firestone, the Fisk, Levine’s and Woolworth) into venues that bear little resemblance to their original uses.

I need to get away — and then return — more frequently to see this progress continue to take shape.