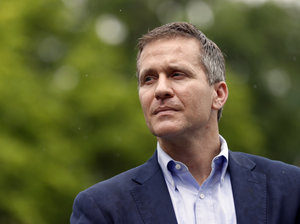 Every so often, a no-name politician thrusts himself onto the nation’s center stage. Occasionally, it’s the result of bad conduct.

Missouri Gov. Eric Greitens has resigned his office. The Republican up-and-comer is quitting in the midst of scandals involving a former paramour with whom he was having an affair. He allegedly threatened her by releasing a racy photo of her if she said anything publicly about their affair.

Greitens, a former Republican political star, denies wrongdoing. He calls the stories a “distraction.” He says it has put a strain on his family; uhh, yeah, do ya think?

Contrary to what this “family values” pol has said, this issue with his philandering (to which he has admitted) isn’t just a “private” matter. This former Navy SEAL proclaimed while running for governor that he is a “proud husband and father.”

Greitens’s pride in his marriage was then determined to be a lie. Bigly, man! He campaigned partly on the basis of his marital fidelity.

Thus, it becomes the public’s business.

He’s going to leave office. Fine. Don’t let the door hit you in the wherever, dude.

Let there be a lesson to be learned here. If you’re going to talk about family values while running for public office, you’d better be skeleton-free.