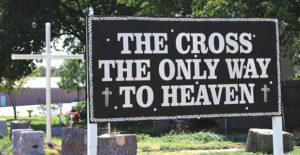 CLARENDON, Texas — We have been traveling through this community for more than two decades en route from Amarillo to the Metroplex … and occasionally beyond.

During a relatively recent span of time, though, I have been struck by the plethora of religious symbols that have sprouted up on both ends of the highway that courses through the Donley County community.

Some of them are crosses, symbols of Jesus’s crucifixion. There are signs, too. They speak about God. There’s a touch of preaching in them; some of the signs speak of the “only path to salvation.” That kind of thing.

I’ve long wondered: Who put these messages out there? Did the city sanction them? I’ve sniffed around only a little bit.

Then I found a link to an Amarillo TV station that rooted out an answer or two.

As KFDA NewsChannel 10 reported: A local resident, Jim Griffin, put the signs up. They are meant to predict consequences far worse than 9/11. They seek to espouse Christian belief.

Not everyone is happy about the signs, or the crosses, or the message some have construed — which is that Clarendon is welcome only to Christians.

Hmm. I don’t buy that. I’ve never felt “evangelized” when I read the signs or look at the crosses.

The signs generally speak of hope and faith. Is there something really wrong with that? I think not.

Yes, it is a curious community feature. I have noticed that all the signs and the crosses are sitting on private property. I haven’t noticed anything on the Clarendon College campus, or at the Donley County Courthouse, or at Clarendon City Hall. There clearly would be a constitutional concern were there to be such messages delivered on public property. That First Amendment prohibition, after all, does prevent government from sanctioning any specific religion.

Not everyone is happy about it. Read the editorial in the Clarendon Enterprise here.

As for non-Christians’ feelings as they motor through Clarendon, I am sensitive to that, too. However, I am unaware of anyone forcing individuals to abide by whatever message the signs convey.

I rarely stop in Clarendon for anything other than gas or perhaps a convenience snack or cold drink. I might feel differently about the crosses and the signs if a convenience store clerk were to start preaching to me.

My response would be: Talk to me on Sunday — in church!