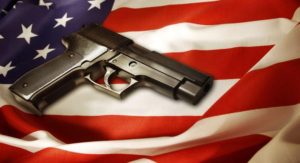 WICHITA FALLS, Texas — A long time passed from when the Texas Legislature voted to allow open carry of firearms before I saw someone actually packing a pistol on his hip.

My wife and I were returning to Fairview today after spending some time in our RV in Amarillo when we walked into one of our favorite eating places in Wichita Falls. We wanted to grab a quick bite before heading on down the highway toward home.

A couple was disciplining a youngster a few tables away. The gentleman was particularly loud in seeking to get the boy to settle down. He has one of those annoying voices that we would have heard even if the eatery was packed wall to wall with customers.

I mentioned the grating sound of the guy’s voice to my wife, who then informed me, “Yes, and he’s carrying a gun, too.”

I shot a glance over my shoulder at the guy. Sure enough, there it was. In plain sight. Some kind of high-caliber semi-automatic pistol.

Then it occurred to me: Just as concealed carry laws have made motor vehicle drivers a bit more circumspect with other drivers who cut them off in traffic — at least that’s my view — open carry laws damn sure would prevent someone from speaking out against someone who, um, is bellowing to a youngster.

I didn’t think of saying anything to this guy. But what if someone else on the other side of the table heard him and decided to confront him over the tone of voice he was using to calm the little boy down?

Having seen the firearm on this guy’s hip, I know I’d never say a word to the guy.

As for whether my wife and I will frequent this eating establishment in the future, that’s another matter altogether. I prefer to enjoy a meal in an establishment where guns are prohibited.

One thought on “Guns make us bite our tongue”