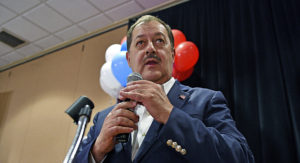 Good news, if you’re a Republican who was worried about the West Virginia GOP primary.

Don Blankenship will not be your party’s nominee for the U.S. Senate.

This is the former owner of the coal mine that blew up, killing 29 miners. He served prison time as a result.

So he thought he would take his plunge into politics by running for the Senate. Blankenship was, shall we say, a terrible candidate. He called Senate Minority Leader Mitch McConnell “cocaine Mitch,” and used a stupidly ignorant term to refer McConnell’s Asian heritage, calling Transportation Secretary Elaine Chao a “Chinaperson.”

My hat is now tipped to the West Virginia GOP voters. You have demonstrated a level of wisdom that got lost in 2016 on a national electorate that placed Donald Trump in the White House.