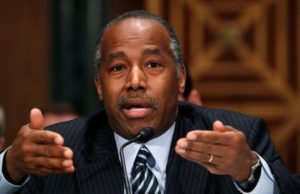 Let’s explore for a moment the “populism” that Donald Trump ran on to become president of the United States.

As I understand the term, a “populist” politician is one who looks after the so-called “little guy,” who is a champion for those who need a hand from others to help them.

OK, let’s stipulate that his entire previous life prior to politics suggests nothing of the sort. He was not committed to anyone other than himself. He sought to gain massive wealth and succeeded … as near as anyone can tell.

Let’s look, then, in the current moment. Housing Secretary Ben Carson — the one-time renowned neurosurgeon — has pitched an idea that sounds quintessentially anti-populist. He wants to triple the rent that Housing and Urban Development residents pay to live.

Triple, I tell ya.

I should add that Dr. Carson, brilliant doc that he is, has about as much (or little) exposure to government policymaking as the president. Trump selected Carson to run HUD because, well … I have no reason why he selected him. Perhaps he couldn’t find someone with actual experience in government to run the massive agency.

Carson’s rationale for seeking a tripling of the rental rates is that it would provide an “incentive” for those Americans to do better for themselves. Sure thing, Doc. Someone who’s been poor all his or her life is going to say, “You know, now that I have to pay three times what I can afford to pay to keep a roof over my head, I’ll just get off my duff, get to work and everything will be all right.”

That ain’t how it works in the real world. The deepest forms of poverty so very often are ingrained in people’s psyche. They need compassion, empathy and they need their government — the one that pledges among other things to “provide for the general welfare” of the public — to step up.

A populist president and a populist housing secretary wouldn’t consider pricing someone out of public housing to be a productive and compassionate way to run the federal government.

Do I want the government to offer an endless stream of money to every American? Of course not. I am as pro-hard work as anyone.

I also am one who believes that government should be available to those who have been swallowed up by circumstances they cannot always control. Populists would as well.