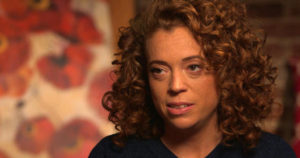 I’ll admit readily that I did not know who Michelle Wolf was … until Saturday night.

The comedian took the podium at the White House Correspondents Dinner and proceeded to offend a lot of Americans with her crude, profane and tasteless remarks.

I am one of those who found her to be (a) not funny and (b) oblivious to the bounds of good taste.

I addressed the unfunniness of her shtick with a blog post I published last night. I got some pushback from my social media network of friends who think Wolf merely dished out a sample of what has come from Donald J. Trump since the moment he entered the 2016 presidential campaign.

With that, I want to address briefly the serious line that Wolf crossed with her comments at the correspondents dinner.

She went where serious comics shouldn’t go. She criticized the appearance, for example, the appearance of White House press secretary Sarah Huckabee Sanders, who had the intestinal fortitude to sit through the entire evening of inappropriate ridicule.

Wolf also was shockingly profane, dropping at least one F-bomb that I heard (before I changed the channel). She also used a term to describe the female anatomy that used to be forbidden on national TV; see the late comic George Carlin’s legendary routine on “The Seven Words You Can’t Say on Television.”

The pushback from my social media network misses, in my view, another fundamental point. It is the tendency to go low when others go low. Why in the world couldn’t Michelle Wolf stay somewhere near the high road in criticizing presidential policies? She didn’t. She decided instead to slither straight into the gutter where Trump and many of his cronies continue to wallow.

Wolf’s comments told me plenty about her and not a damn thing new about the objects of her scorn.

Am I a “suck up” to Trump, as one of my social media friends suggests of those who are critical of Michelle Wolf’s routine? Not for an instant. I am not defending the president’s policies, or the lies that his allies tell on his behalf.

I will, however, stand behind my own view that there really are certain boundaries one shouldn’t cross when delivering political criticism. Sure, Donald Trump crosses them all the time. That doesn’t give anyone license to respond in kind.

I guess now, though, we’ll get to watch Michelle Wolf bask in her 15 minutes of fame.

2 thoughts on “Wolf crossed an important line of criticism”