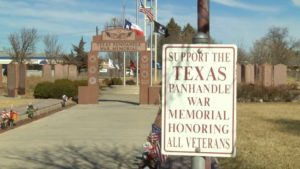 Randall County has vacated its former Courthouse Annex at Georgia Street and the Canyon Expressway.

The building is dark.

However, as I understand it, the old annex might not be dark for too long. That’s my sincere hope.

The Texas Panhandle War Memorial board of directors hopes to convert the annex into a chapel. It would become a place where those who visit the nearby War Memorial can go to pray, to thank the Almighty himself for the sacrifice in defense of our country made by those who are honored at the memorial.

The annex once served as Randall County’s avenue for its residents who live in southern Amarillo. The tax office was there, along with a justice of the peace court; the sheriff’s department also had a small office in the annex. They’ve all moved to much more spacious quarters at the corner of Western Street and Paramount Boulevard into a building once occupied by Nationwide Insurance.

Thanks to some wheeling and dealing by County Judge Ernie Houdashell, the county has now opened a virtually full-fledged courthouse operation to serve the county’s Amarillo-area residents. The new annex features about six times the space, plus a county clerk, district clerk, district attorney and a court at law operation.

The old annex site, though, needs to be made functional in another form. It needs to be re-purposed to suit the needs of the War Memorial board, which serves to honor the memories of those who died in defense of our country.

The memorial board is seeking to raise money to build — eventually — an interactive education center next to the garden, the granite stones and the names of those from throughout the Panhandle who have fallen in battle.

Oh, how I hope the former annex site can be re-fitted and brought back to life as a chapel. Those who pay their respects to our fallen warriors need a place to pray and to reflect.