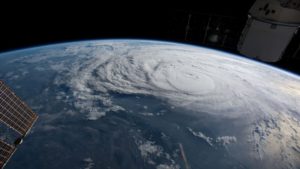 BEAUMONT, Texas — Here’s the buzz my wife and I are getting while visiting friends in the Golden Triangle: Hurricane Harvey left a lasting — but not indelible — impact on this region.

We’re hearing that many neighborhoods remain under repair. The Northwest Forest neighborhood west of the city is “like a Third World country.” Streets are under repair. We noticed huge slash piles of brush stacked up under tall timber along Interstate 10 as we entered the city.

But the city will fight its way back.

Hurricane Harvey stormed ashore for a second blast in the late summer of 2017, dumping a record-setting 50 inches of rain in a 24-hour span of time. It deluged the city water system. Two of our friends told us of being without water for more than a week, while the electricity was restored in short order.

“Riverfront Park is destroyed,” we were told. The park used to be a site of outdoor activities next to the Civic Center along the Neches River. It’s now gone.

We all have read about huge fundraising efforts ongoing to assist the folks in Houston, about 80 miles west of the Golden Triangle on Interstate 10. Houston Texas all-pro defensive end J.J. Watt has become an iconic figure in the Bayou City for his work raising more than a quarter-billion dollars to assist in the repair of Texas’s largest city.

Yes, Houston needs help. The state and the federal government have stepped up to lend disaster assistance.

The pain stretches a good bit beyond the big city. Beaumont is feeling the pain brought by the storm’s rage.

I have no doubt that our friends in the Golden Triangle will recover. They will triumph. They will get on with their lives.

I’m betting, though, they’ll never listen again to the sound of rain with the same serenity it used to bring.