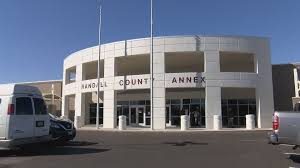 My son and I were running errands this afternoon when we scooted past the new Randall County Annex on Western Street and Paramount Boulevard.

I pointed to the building and told my son how proud I am of Randall County Judge Ernie Houdashell for all the work he put in to get that project completed.

The annex replaces the outdated office at South Georgia and the Canyon E-Way. It gives county employees about six times the room they had in the old place. It provides county residents with a virtually full-service courthouse in southwest Amarillo, which provides the vast majority of the county’s revenue, given that most of the county’s residents live in Amarillo.

Now, what about the old courthouse, the one on the square in Canyon, where the county formerly operated its government? The exterior of that building has been dolled up. The inside? It remains unoccupied. The county long ago moved most of its functions off the square into the Justice Center, formerly known as the Wal-Mart store across the street from West Texas A&M University.

I told my son that the square has revived. It is thriving these days, a point that Houdashell wants known. He credits the dressing up of the old courthouse building for luring more businesses surrounding the structure on the square.

The county judge, who is running unopposed for another — and likely his final — four-year term this year, has arguably just one more big project to see to fruition: finding an occupant for the old courthouse.

Canyon City Hall gave the 1909 Courthouse a good look a couple of years ago, before deciding against moving; the cost was prohibitive, said City Manager Randy Criswell.

I am pulling hard for my old pal Houdashell to find someone to move into the old courthouse building. He’s scored some successes already during his time as county judge: the county has built a new sheriff’s complex; it has dressed up the Panhandle Veterans War Memorial with two smashing exhibits (an F-100 Super Sabre jet fighter and a UH-1 Huey helicopter similar to one on which Houdashell served in Vietnam); and, of course, the new annex.

Houdashell is a dealmaker extraordinaire. I’m hoping he can pull a rabbit out of his hat and find someone who’ll occupy the old courthouse in Canyon.

The puzzle will then be complete.