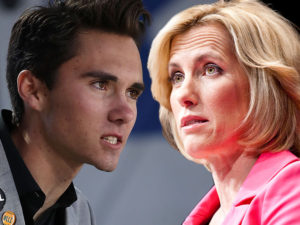 David Hogg is one of those teenagers who has risen to the top of the public’s awareness in the wake of the Parkland, Fla., school massacre.

He is an articulate young man who’s become a leading spokesman for the survivors of the shooting that killed 17 students and staff members on Valentine’s Day. He has spoken eloquently about the need to end gun violence. The media have glommed onto Hogg and a few other of the leading student spokesmen and women who have emerged from this horrific tragedy.

He also has gotten involved in a silly dispute with a noted conservative columnist and commentator who had the bad taste to tweet something disparaging about Hogg.

Ingraham has since apologized “in the spirit of the Holy Week.” Hogg isn’t accepting here apology and is now mounting a boycott against her show, encouraging more advertisers to drop their sponsorship of her radio show.

Let’s hold on for a second.

This tears at my sensibilities. For starters, Hogg didn’t deserve to be called a “whiner” in Ingraham’s tweet, which was in response to something Hogg had said about being rejected by several universities despite his stellar 4.2 GPA at Marjory Stoneman Douglas High School. He also has been accused falsely of being a “crisis actor,” someone hired to play the part of someone involved in a school massacre.

Then again, Ingraham’s apology was full-blown. She said she is sorry for any hurt she has caused among the “Parkland victims.”

If it had been me, I would have accepted her apology and then moved on. Hogg doesn’t see it that way. He said Ingraham apologized only because the advertisers were bailing on her.

Joe Concha, media reporter for The Hill newspaper, says Hogg’s anger may be setting a potentially dangerous precedent if he persists on trying to end the career of someone who has said she is sorry and has admitted to making a mistake.

Read his analysis in The Hill here.

I have to concur with Concha’s analysis.