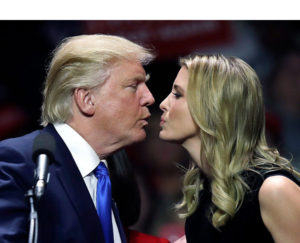 Ivanka Trump is walking the finest of lines.

She is the elder daughter of the president of the United States. She also is an unpaid senior adviser to the Leader of the Free World.

So, when she gets asked by a broadcast journalist about the allegations of sexual abuse leveled against her father/the president, she reveals why it’s important that the president be mindful of the problems nepotism poses in hiring senior advisers.

Ivanka cannot serve in her “official” capacity without facing difficult questions surrounding her “boss,” who also happens to be her father.

She called the question posed by NBC News’s Peter Alexander “inappropriate.” Wait a minute, young lady. He was asking the question of a senior policy adviser, not of a presidential daughter.

This is why nepotism is a bad thing when it involves people at the highest levels of government.

Many decades ago, the federal government implemented an anti-nepotism policy in response to questions surrounding the appointment in 1960 of Attorney General Robert F. Kennedy by his brother, President John F. Kennedy. After JFK’s murder in November 1963 and after RFK was elected to the U.S. Senate the following year, the government enacted a policy that prohibited hiring by presidents of “linear” relatives to paid positions.

It didn’t cover the role that Ivanka Trump fulfills in her father’s administration.

There needs to be some tightening of these rules. If it’s not going to happen, then the president needs to send his daughter packing.