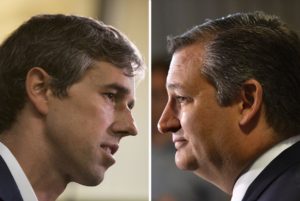 Yes, that is correct, according to the Texas Tribune.

The Democratic challenger for the U.S. Senate is outraising the Republican incumbent … in heavily Republican Texas!

I know what many Texans are thinking about now: This means Beto is going to win the election this fall; Cruz is toast; he’s a goner; he’s done.

Not so fast, dear reader.

I’ll stipulate that I am no fan of The Cruz Missile. He has p***** me off plenty during his six years in the United States Senate. Cruz is the latest version of former Sen. Phil Gramm, of whom it used to be said that “the most dangerous place in Washington is between Gramm and a TV camera.” Replace “Gramm” with “Cruz” and you get the same punchline.

The Tribune also notes: While this is a sign of momentum for O’Rourke, it’s worth considering that this race, in a state as big and expensive as Texas, could cost into the tens of millions. Moreover, Cruz is likely to have a deep well of super PAC money to help him in the fall, while O’Rourke early on in his campaign pledged to not accept corporate political action committee money.

Hey, I want O’Rourke, a congressman from El Paso, to win this fall as much the next guy.

It’s good to remember that Texas Republicans are a dedicated bunch. They go to the mat for their candidates no matter what.

It is true that O’Rourke has spent a lot of time at town halls, talking to folks at plant gates, grange halls, saddle and tack shops, shopping malls — you name it — he still is campaigning in a state that hasn’t elected any Democrat to statewide office for two decades. He also has familiarized himself with the expansive landscape of the Texas Panhandle, which is Ground Zero of the Texas Republican political movement.

Now that I think about it, this might be the year for that lengthy streak to come to an end.