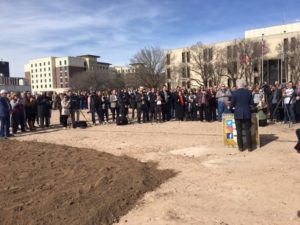 A crowd of about 200 or 300 folks came today to a vacant lot across from Amarillo City Hall. There was some back-slapping, congratulatory wishes and plenty of smiles to be seen.

And for a very good reason.

They broke ground today on a $45 million entertainment venue — aka The Ballpark — that is likely to help lead downtown Amarillo toward a future that few of us thought was possible.

I do believe the future is a bright one.

The multipurpose event venue has been called a “catalyst” that would spark downtown Amarillo’s revival and rebirth. They lit that catalyst this afternoon. May the spark now light an economic fire. 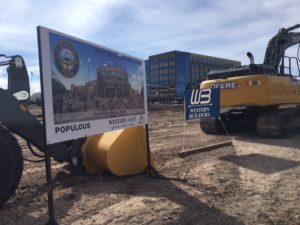 Given the hope and optimism I witnessed today under a bright winter sun, I have a hunch many of those in attendance today believe that high-minded goal is well within reach. I hope it comes true.

I am acutely aware that a big crowd at a ceremonial groundbreaking doesn’t guarantee success. Construction has to proceed quickly. It should be done at or under budget.

The MPEV will need to open with lots of people sitting in its seats to watch the baseball team that is moving here from San Antonio. Many high-profile supporters of the MPEV — and I can cite retired Amarillo College President Paul Matney as one of them — have contended that Amarillo is a “good baseball town.” We will determine the legitimacy of that claim in due course.

The catalyst also is slated to bring more business into the downtown district. It will help fill a shiny new hotel and a parking garage across the street from the Civic Center. It also might become a good promotional tool for the city to lure more convention business, which will bring presumably deep-pocketed visitors to Amarillo.

That’s all in the immediate future for a city that has embarked on a serious makeover of its central business district.

Today, they broke ground on the next big step on the city’s journey toward a brighter future.