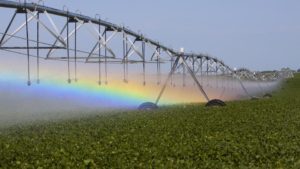 The Texas Panhandle drought has gotten us  talking out loud again about water, conserving it, looking for more environmentally sound ways to grow and harvest our crops.

We’re now into a lengthy dry spell with no measurable precipitation. The record is now just a handful of days away. It’s looking as though we’re going to break the record set in 1902. Hey, all records were meant to be broken. Frankly, I’d prefer to see this one stand.

But is Amarillo about to run dry? No. Not even close.

Some aggressive water-rights purchasing over the course of the past decade has enabled Amarillo to maintain a viable water supply. The city in conjunction with the Canadian River Municipal Water Authority — which supplies Amarillo and nearly a dozen other communities with water — acquired many years of water rights from T. Boone Pickens, the former Amarillo oil and natural gas magnate.

Many billions of gallons of water remain undeveloped. It’s under our feet, deep within the Ogallala Aquifer.

We have a serious lesson that needs to be heeded, however.

Our water is not infinite. It won’t last forever. Oh, certainly Amarillo will have water at its disposal for many generations. We can thank an aggressive water-purchasing endeavor led by a municipal management team headed by a city manager, Jarrett Atkinson, with extensive knowledge of water management issues. Atkinson has moved on; he’s now city manager in Lubbock.

The drought that has gripped the Panhandle, though, looks as though it could be worse than it was in 2011, when it got — shall we say — pretty damn severe. Lake Meredith sank to a shockingly low 26-foot depth; it has rallied considerably since then, but the region needs rain badly.

As we wait and perhaps pray for more rain, we at least can rest reasonably assured that Amarillo will stay “wet” for the foreseeable future.

We dare not get wasteful while we wait for a change in our meteorological fortunes.