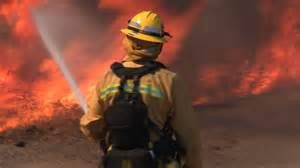 Here we go yet again.

Who answers the call to help? The firefighters, police, emergency medical personnel. That’s who.

It’s happening yet again in southern California. Those dreaded Santa Ana winds are devastating a region and imperiling the lives of millions of Americans.

It should go without saying, but these men and women are the truest heroes imaginable. They run into the firestorm. They fight these unspeakable forces from the air and on the ground. They expose themselves to heat, flame, smoke and utter exhaustion.

And then we have neighbors helping neighbors. They, too, deserve our prayers and good wishes as they all — every one of them — battle to save what they can against forces far stronger than anything they can ever hope to control.

This has been a tough year for so many Americans. The Texas Gulf Coast and Florida are still battling to recover from the savagery of hurricane wind and rain. Puerto Rico and the Virgin Islands residents cannot yet get full power and potable water restored after enduring their own misery from yet another storm.

The Santa Rosa fires up north from the inferno that is engulfing southern California at this moment brought their own measure of agony to beleaguered residents and the responders who rushed to their aid.

We should salute them all. We should pray for their safety. We should hope for as speedy a recovery as is humanly possible.

Thank you, heroes. All of you make the rest of us so proud.