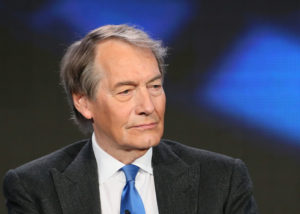 I’m not going to venture too far out on the proverbial limb by making this declaration: Charlie Rose’s broadcast journalism career likely is over; he’s toast; he’s done, finished, a goner.

Sexual harassment and sexual abuse charges have brought down the former “CBS This Morning” co-host. CBS fired him today after allegations arose from eight women who said Rose pranced naked in front of them and made improper sexual advances. PBS also terminated its relationship with Rose, who had a late-night interview show on the public TV network.

The wave of reform continues to purge the media and the entertainment industry of men who behave badly. Yes, the political world also has been affected by this scourge. Women have accused Alabama U.S. Senate candidate Roy Moore of coming on to them when they were underage girls; U.S. Sen. Al Franken is facing pressure from political progressives to quit his office after two women have accused him of groping and unwanted kissing; U.S. Rep. John Conyers has acknowledged “settling” with women who accused him of harassment — but, in a weird statement, denies doing anything wrong.

I’m going to give Fox News credit for the way it handled the Bill O’Reilly matter. Women accused O’Reilly of bad behavior. The network where he worked as a talk-show host paid out big money to settle the complaints. It then suspended O’Reilly … and then it fired him.

The O’Reilly story, in my view, is what made Rose’s departure from CBS a done deal after the allegations came forth.

Where this all goes remains anyone’s guess. It well might end only when the last news media outlet gets rid of its last sexual predator; or when the last entertainment tycoon with similar proclivities is revealed.

As for the political world that is beginning to roil in this climate, it’s fair to wonder how many sudden “retirement” announcements we’re going to hear from pols who are overtaken by guilty consciences.

Something tells me many more men are going to be culled from the public stage.