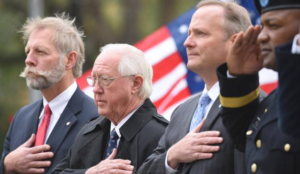 I am proud of West Texas A&M University, even though I never attended the school; nor did either of my sons.

My pride stems from the decision to erect a memorial on the WT campus that honors those grads from the school who have given their full measure of devotion in service to their country.

They broke ground the other day, with several dignitaries on hand to turn some dirt over to symbolize the start of construction.

This project exemplifies in my mind the nation’s continuing redemption toward the way it treats those who have served in the nation’s military. It wasn’t always this way, as those of us old enough can remember.

I was struck to see Randall County Judge Ernie Houdashell (second from left in the picture attached to this post) among those breaking ground. Houdashell is a buddy of mine and he — like yours truly — served in Vietnam during the war that tore the nation apart. The national reaction to that war sank the nation to its emotional nadir as it related to its treatment of veterans. I know that Houdashell remembers that time, because he has told me so.

That was then. The here and now brings loads of respect and affection for the men and women who have answered the call.

As for the WT memorial, it will bring additional honor to those who paid the ultimate sacrifice in every war this nation has fought since 1917, when we entered World War I.

Times do change. So do attitudes. It’s part of a national maturation. Indeed, the nation hasn’t always acted maturely where its veterans are concerned.

We’re doing so now — and that’s all that really matters.