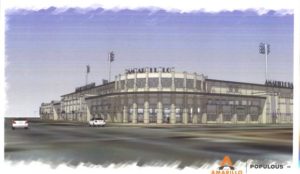 Amarillo’s Local Government Corp. has approved a design concept for arguably the most significant downtown project of the past half-century.

It doesn’t have a name just yet. It’s going to be a multipurpose event venue, or MPEV. It’s also going to be a minor-league baseball venue, a ballpark. It’ll cost about $45.5 million to build.

It’s going to be home to a AA minor-league baseball franchise that is moving from San Antonio to Amarillo. Plans call for the ballpark to be finished by February 2019. They’ll toss the first pitch for the new baseball season in April 2019.

City Councilman Eddie Sauer — a member of the LGC — said he saw something “iconic” in the design that the LGC approved unanimously. “When I looked at it, I immediately saw something iconic,” Sauer told the Amarillo Globe-News. “I felt like I could see the Potter County Courthouse, the Santa Fe Building. It was special, I felt, with an eye for what we already had downtown.”

They’ve knocked down and scraped away the remnants of the old Coca-Cola distribution center that used to occupy the site along South Buchanan Street. I noticed some piles of dirt on the site the other day while driving downtown.

Plans call for work to begin shortly after the first of the year. Elmore hasn’t yet signed the lease agreement but that event reportedly is imminent.

I keep hearing the naysayers give raspberries to this project. They keep wondering aloud why the city is spending so much of its effort in reviving downtown.

I also keep wondering: How in the world is all this a negative development for Amarillo? Yes, there have been some hiccups and missteps along the way. The city got through them. The LGC negotiated a 30-year lease agreement with the owner of the baseball team that’s coming here. The team owner, Elmore Sports Group, is going to pay the city $400,000 annually to rent the ballpark. The city plans to pay for the ballpark with hotel occupancy tax revenue.

And in the bargain, the city’s downtown district will breathe deeply and is expected to throb with activity. We’re already seeing new urban residences being built; there will be new retail establishments; retail space along the ground floor of a shiny new parking garage is beginning to fill up; the just-opened Embassy Suites hotel figures to attract conventions to the Civic Center.

This is a bad thing for Amarillo? To my way of thinking, it’s pretty damn good.

One thought on “Now we have a design for The Ballpark”