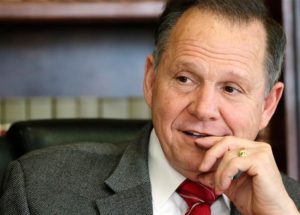 The man whom Alabama Republican primary voters have nominated for the U.S. Senate is truly a frightening individual.

He is Roy Moore, the former chief justice of the Alabama Supreme Court. Just the other day he talked at a campaign rally about his support of the Second Amendment — and then pulled a pistol out of his pocket to prove his point.

That’s not the particular point of this blog post, however.

This one-time jurist believes that “homosexual activity” should be made illegal. I’ll take a leap here and presume he believes that gay couples must not be permitted to engage in any form of intimacy.

I’m now wondering: How does one enforce such a law?

It reminds of me a terrible “anti-sodomy law” that once was on the books in Texas. That law gave license, as I read it, for law enforcement officials to raid people’s bedrooms to enforce the prohibition against intimacy involving gay men. It’s no longer on the books.

So, what is Roy Moore suggesting? That law enforcement authorities barge into people’s homes to make sure they’re not engaging in “homosexual activity”?

This is the fellow who was stripped of his judgeship for (a) refusing to remove a Ten Commandments display from public property and (b) encouraged county clerks in Alabama to ignore a U.S. Supreme Court ruling that required the issuance of marriage licenses to same-sex couples.

Alabama is a deeply Republican state. This fellow stands a good chance of being elected to the U.S. Senate seat now held by Luther Strange, who was appointed to the Senate after Jeff Sessions left to become U.S. attorney general.

If it comes to pass, I believe Capitol Hill is going to become a significantly loonier place.

One thought on “Make ‘homosexual activity illegal’? How?”