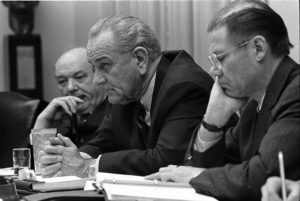 Watching the PBS documentary series “The Vietnam War” brings to mind a chance meeting I had in late 1995 with one of the villains of that national tragedy … Robert McNamara.

I like telling the story, so I’ll provide it here knowing, of course, that it involves only two people — and one of them is dead.

Morris Communications Corp. had convened a meeting of newspaper editors and publishers in Washington, D.C., to discuss how the group had planned to cover the upcoming 1996 presidential election. I was editorial page editor of the Amarillo Globe-News, so I got to attend the meeting.

One Sunday morning right after we arrived, we had a day off. I took the time to walk from the hotel to Arlington National Cemetery. The morning was quiet. Traffic was light. Streets had few pedestrians.

I waited at a corner for the light to turn green so I could cross. I noticed an elderly gentleman walking toward me from another corner. He was carrying a shopping bag full of groceries.

I looked and then looked more intently at the gentleman. It was Robert McNamara, secretary of defense during the Kennedy and Johnson administrations. He had just published a book, “In Retrospect: The Tragedy and Lessons of Vietnam.”

In the book, McNamara acknowledged that he knew as early as 1963 that the Vietnam War was a lost cause. He also admitted that he kept quiet about what he believed at the time. He continued to advise Presidents Kennedy and Johnson to keep sending young men to die in Vietnam.

I was one of the young men he allowed to go to Vietnam; I got my orders in the spring of 1969 and reported for duty at Marble Mountain, Da Nang, to work on Army surveillance aircraft.

I was filled at the time of the book’s publication with anger that McNamara would have kept those thoughts so damn private, that he wouldn’t have spoken out in real time about what he believed about the future of that tragic conflict.

He approached me on that quite D.C. street that Sunday morning. “Mr. Secretary,” I said, “I want to introduce myself. My name is John Kanelis. I live in Amarillo, Texas and I just want to tell you how pissed off I am at you after learning about what you wrote in that book you just published. I was one of those men you sent to Vietnam.”

McNamara smiled and said, simply, “You are a very observant young man.” I smiled back at him and offered a conciliatory follow-up. “I am glad that you finally came clean,” I said.

He thanked me. We shook hands and he walked away.

I continued on to Arlington National Cemetery and paid my respects to President Kennedy and his brother, Robert Kennedy.

And I felt better for getting those thoughts off my chest.