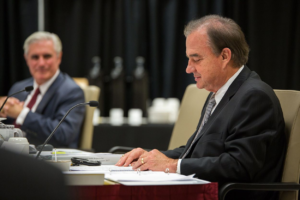 It is that human misery crosses party lines. To that end — and this appointment likely isn’t being done to illustrate that point expressly — Gov. Greg Abbott, a Republican, has tapped a leading Texas Democrat to lead the Gulf Coast rebuilding effort.

Indeed, Chancellor Sharp has serious skin in this game. He served in the Texas Legislature — in the House and then the Senate — while living in Victoria, a community that was rocked by Harvey’s first landfall on the Texas coast. So, he feels the pain of the folks suffering the ongoing misery that Harvey left behind.

Sharp also is the latest Democrat elected to statewide office in Texas. He served as comptroller of public accounts from 1991 until 1999. I have no particular reason for mentioning that, other than to note that Sharp’s partisan affiliation is well-known; it speaks well, too, of Abbott’s willingness to reach across the political aisle to find someone to lead this massive effort.

I join the rest of the state in wishing the chancellor well and Godspeed as he takes on this huge task. He surely knows what awaits him as he takes charge of the governor’s new task force.