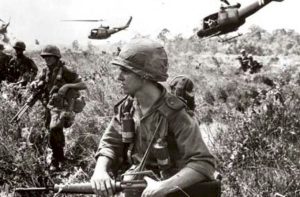 A landmark documentary is set to premier on PBS soon. I am anticipating its opening. “The Vietnam War” is a collaborative effort by the acclaimed filmmaker Ken Burns and Lynn Novick, who isn’t as well-known as Burns, but likely will be once this series runs its course.

The series well might help us heal from those wounds of a long-ago war. That’s my hope, anyway.

I took part for a brief period in that conflict. I got my orders and reported for duty as an Army aircraft mechanic. I arrived at Marble Mountain, Da Nang, in the spring of 1969. I served my time and came home.

I’ve told you already about the emotional baggage I shed when I was able to return to that place in 1989. A lot of Vietnam vets have done much the same thing. Many of them had damn heavy loads to release; they were combat vets. I was not one of them, but the baggage was real.

The nation learned many valuable lessons about itself during that war and in its immediate aftermath. I want to look briefly at two of those lessons, which I hope the Burns-Novick film will discuss in detail beginning Sept. 17 (on Panhandle PBS).

We learned how to lose a war. The United States didn’t “lose” this conflict in the traditional sense. The enemy didn’t defeat us on the battlefield. Indeed, our armed forces were able to declare victory in virtually every major conflict we entered against the Viet Cong and the North Vietnamese military.

We inflicted more casualties on them than they did on our side. We captured more of their fighters than they did of ours. We won the fight on the field.

We lost the fight politically. We lacked the stomach to stay in the fight “for the duration.” The Vietnamese were fighting on their turf, fighting for their cities and villages. They were fighting to protect their land.

They had the will to keep fighting. And they did. We lost our will and came home in early 1973. Two years later, left to fend for themselves, the South Vietnamese armed forces were overrun by the North. On April 30, 1975, the shooting stopped.

We didn’t win that fight and it has stuck in our national craw ever since.

I’ve made peace with that fact over the years. I get how it went down. I trust “The Vietnam War” will explain it to those Americans who still wonder: How did we win all those battles but lose the war?

We mistreated our returning warriors. This might be the most shameful aspect of the war, at least in my mind.

I didn’t get spit on. No one called me names. I never once was disrespected outwardly and openly when I wore my uniform while at home upon my return. Too many of my colleagues, though, did receive such mistreatment. It was disgraceful in the extreme.

It is amazing today to listen to left-leaning commentators extol the heroism of our fighting men and women engaged in war in Afghanistan and Iraq. Think about that for a moment. Fifty years ago, those same leftish pundits might excoriate the returning warriors. There might be veiled references to the “atrocities” they committed. They likely would be treated with far less respect and dignity than they are today.

These days, I like wearing my Vietnam vet ball cap when I’m out and about and, yes, I welcome the occasional expressions of “thank your for your service” greetings I get from strangers. That would not have occurred in 1970.

We have turned an important corner in our national upbringing, and it warms my heart to know that we no longer condemn the fighting men and women for doing their duty to their country, just like we did during the Vietnam War.

Ken Burns and Lynn Novick have taken on a profoundly important project with this series on that long-ago, but never-forgotten war. It taught us many lessons about ourselves as a nation — and as individual Americans.

Their documentary is a landmark event in every meaningful sense of the term.