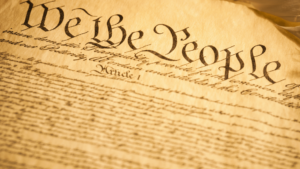 They stated in that document of independence declaration that “all men are created equal.” They put their names on the Declaration of Independence, many of them picked up their muskets and then went to war against the British Empire.

The fighting stopped in 1781. Then the founders went to work crafting a governing document we now know as the U.S. Constitution.

Did they get it 100 percent right when they signed off on that framework? Not really. I can think of two egregious errors of omission in that document.

The founders did not grant “all men” equal rights. Black men were enslaved. They were considered to be three-fifths of a human being. All men were created equal? No. The Emancipation Proclamation would set the slaves free in 1863, but it would take the nation two more years to ratify the 13th Amendment to the Constitution that abolished slavery once and for all.

Nor did the founders grant women full rights of citizenship, although they likely thought they were doing so at the time. Women couldn’t vote. They were mere spectators. It took the government a good bit longer to correct that error. In August 1920, the 19th Amendment was ratified, granting suffrage to women.

Thirty or 40 years ago, I might be inclined to dwell on those negative elements of our nation’s history. Today, I choose to concentrate on what the founders did right.

Their forebears came to this new land to escape religious persecution. Thus, the founders created a secular Constitution. They granted every citizen religious freedom, which also means they were free to not worship if they chose.

The founders separated the government into three co-equal branches, granting equal power to each of them. The president proposes laws; Congress disposes of them; the courts ensure their constitutionality.

The great Winston Churchill famously declared that representative democracy is the worst form of government ever created, but is superior to anything else. The founders, of course, didn’t anticipate such wisdom coming from the British Bulldog.

I also am quite certain they would agree with him.

Therefore, I choose to salute the founders’ success today. Their government is being tested yet again. I remain confident it will continue to function as those great men intended.